Comair celebrated its 20 year-franchise agreement with British Airways by commissioning one of the biggest aeroplane cakes in South Africa.

The airline commissioned Cake Extreme to create a 4 meter replica of the airlines new aircraft ZS-ZWH, a Boeing 737-800.

The cake was created live at the OR Tambo International Airport in Johannesburg, South Africa..

Paulo Vieira – CEO of Cake Extreme made sure the cake had all the details that he could possibly add to this project. The cake boasted all the electrical elements such as Jet turbines, Taxi lights, landing lights and a detailed cockpit with instruments and pilots.

5 000 slices were cut and offered to all VIP guests, airline staff, airport staff, media and commuters that where present at the local terminals.

The event was such a huge success that the hype during the day did not stop until the last slice of delicious cake had been eaten. 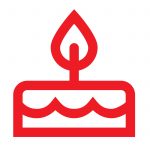